Walking onto the plane at JFK, I wasn’t expecting the week I had ahead of me. After a long day of safe travels, the plane finally touched down in Santo Domingo and I knew my journey was just beginning. From the first step off of the 737, you could tell that something was different. Something new, something unfamiliar, something almost comforting, about the new atmosphere we were entering into.

What you couldn’t tell at a first glance was the faith, the love, the strength, and the hope surrounding you throughout. It takes a lot of courage to enter something unfamiliar and new, but sometimes it takes even the same amount of courage to allow someone into your own world, your own normal. The children and families we met did just that with open arms, and were some of the most humbling and welcoming people I’ve ever met. My eyes have never seen such challenging and brutal conditions, and my heart has never felt such love and warmth.

Not only did I become a Madrina, the godmother of Fiordaliza, but I also became a friend, an inspiration, and a comforting soul to a few children who couldn’t even understand what I was saying. Although the language barrier serves as a restraint to communication, there are no restraints on the relationships formed and built during the duration of the trip. Day in and day out, I thanked God that I was fortunate enough to fundraise and get myself down to the Dominican Republic. These families think we are a blessing, think we are the ones who change their lives, but what is absent in their mind is that fact that they might be some of the greatest blessings that have come across the lives of the Americans, including myself, and they have changed my life more than I can ever put into words.

There are not enough words and pictures that could capture the trip’s true impact on my life, and I wish that more people would embark on a journey similar to this one. Whether it be alone, with a group, inside or outside of the United States, I pray that each and every person has the courage and strength to either consider embarking on their own mission trip or supporting a loved one to do so. This was one of the most amazing weeks of my life, as cliche as it may sound,  and Batey 50 has left an imprint on my heart forever. 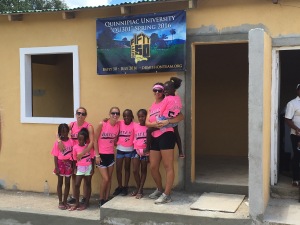 Sela is not your typical business theme. Vibrant, bold, and clean, with lots of space for large images, it’s a perfect canvas to tell your company’s story.
Sela is responsive, which means it adapts to any screen, providing your visitors with a great browsing experience on any device.